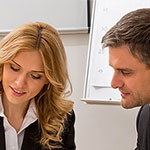 NOTE: The following case study about executive coaching is a composite of multiple individuals.  Any resemblance to an actual person or organization is coincidental.

A highly valued and talented executive was struggling with low productivity in his business unit.  Two years ago, he was promoted to director where his job responsibilities shifted away from managing projects to managing people.  His track record for high performance was quite impressive as an engineer and he had developed a reputation as a person who gets the tough jobs done.  In his new position however, there was a sharp increase in product defect rates, employee turnover had increased by 40%, absenteeism and disability claims had increased by 25%, and HR reported that some direct reports were refusing to work with him.  Marginal improvement was seen in the director after he was assigned an internal mentor and was sent to a two-day leadership workshop.

I met with the director and his supervisor to discuss performance goals and expectations.  We discussed accountability for each party, and I explained my approach to the coaching engagement.  During the coaching engagement, I reviewed the company’s competency model, his most recent 360 report, and met with coworkers in his business unit.  Subsequently, I designed an assessment process to evaluate the competencies for his job position.   After integrating the information and providing the director with feedback, we started a three month coaching engagement focusing on his people skills, anger outbursts,  and leadership style.

One year after finishing our coaching engagement, productivity was up 30% and product defects were well below tolerance levels.  Further, turnover, absenteeism, and disability claims were below the company’s average.  The director reported that our work together gave him the skills and freedom to be himself at work.

Join the other satisfied Executives.

Leaders often wonder “How can I pick and keep the best people for my organization?” They also wonder “Now that I have the best people, how do I develop their talents for peak performance?” Advanced training in the behavioral sciences prepare business psychologists to identify and understand why, when, what, and how employees change to achieve individual, team, and organizational goals. We specialize in employment testing to help you pick the best employees for your business and executive coaching to help leaders develop more effective and efficient job performance.